靖国神社の木漏れ日 The ‘komorebi’ of Yasukuni Shrine

The pavements whisper a sizzling harmony under the mid-summer Tokyo sun. Standing atop, the crowd shuffles forward in a makeshift procession, speeding up at every temptation of shade like a coiled spring. The old and frail, young and nimble, and barely crawling: all march forward, towards the lofty Tori, itself wizened with age and witness to millions, and decades, of passers-by.

Today, seventy years ago, the world stopped. After six years of torment, brutality, countless deaths, and the weaponisation of the very fundamental of creation – the atom – finally, war was over. Women; men; children; young; old; coloniser; colonised: the distinctions that structured mid-twentieth century society mattered little under the glare of World War. But like the worst horror stories, surrender on August 15, 1945 was merely a temporary reprieve. For the past seven decades it has continued haunting the survivors, generation after generation, changing form and infiltrating even the hallowed halls of ‘peace’.

Today, the memories of war still dominate the relations between states. In Northeast Asia, history remains alive, and history remains corrosive. “Comfort women”. The Nanjing Massacre. The San Francisco Peace Treaty. Colonialism. These are just some of the catchphrases of a rift that, more than seventy years in the making, keeps neighbours from overcoming their differences and building a more closely-knit regional community.

For the people of Japan, Korea, and China, perhaps the most visceral symbol of this unresolved conflict is a shrine in central Tokyo, ringed by office buildings, embassies, and opposite the Imperial Palace.

Yasukuni Jinja: the “Shrine of the Peaceful Nation”.

Founded in June 1869, it was built to commemorate the casualties of war who died for the Empire of Japan. Now, it enshrines more than two million souls who perished between the Meiji Restoration and the establishment of the postwar Japanese state in 1947. Soldiers; civilians; men; women; Koreans; Taiwanese; Japanese: it is part artifact, part edifice of a previous age. But the enshrinement of Class A War Criminals, the shrine’s pivotal role in wartime propaganda, the clash of postwar identities in Japanese society, the history of the American Occupation, and the patronage of Prime Ministers, among other issues, have converted a simple structure of polished wood and copper tiles, into a symbol and tool of something much more complicated.

Yasukuni is about how we choose to remember.

On Saturday August 15, 2015, a friend and I joined the thronging crowd heading towards Yasukuni shrine from Kudanshita station. Here we were, Chinese and Australian, male and female, talking in Mandarin, in the middle of a crowd of ex-soldiers, war widows, and the largely postwar generation of Japanese worshippers.

It’s hard to say exactly what each visitor’s motivation was that day. Occasionally you could spot the more ostentatious nationalists, with some iteration of the hinomaru emblazoned on their clothes, and some slogan about “Chinese fabrications of history”. But the density of grey hair also suggested a more personal connection to war and remembrance for a significant portion of the crowd. For most people, however, we could only guess. Perhaps, like us, they were curious to see what Yasukuni would be like on such a politically and historically charged occasion. Which political leader would cause a diplomatic incident and speak? Would there be any anti-war protesters? What about the nationalist groups?

For many, I’m sure, it was simply an opportunity, just like any other year, to pay respect to the lost relatives who had fallen victim to the same war that is memorialised worldwide.

Unfortunately, though, worshipping at Yasukuni is not quite so simple.

It is a highly political space, and one that continues inform and play host to, a particular view of history.

Approaching the shrine, we were bombarded by a kaleidoscope of different civil groups handing out flyers. “Taiwan is not China”. “Free Southern Mongolia”. “Teach the correct history”. “Oppenheimer is the real perpetrator of the Holocaust”. “The communist Asahi Shimbun spreads lies”. Unofficial state flags fluttered in the breeze. Hand-crafted posters with inflammatory slogans competed for attention. It felt like every Japanese right-wing political controversy I’d studied was on full display: textbook revisionism; the “China threat”; “Comfort Women”; constitutional amendment. But it was also a side of Japanese society and politics that I’d rarely seen beyond textbooks and journal articles. I knew it existed; I just never expected to find myself swept up in the swirling maelstrom. 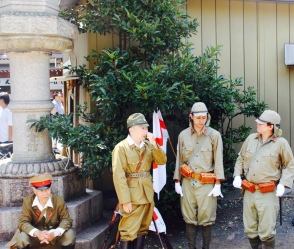 Shuffling forward, deeper into the shrine grounds, we came across more and more anachronistic sights. The middle-aged men dressed as Imperial Army soldiers. The grizzled old man in uniform looking like he’d walked straight out of Port Arthur in 1905, nursing a very 21st century P.E.T bottle of cold o-cha.

Perhaps most disturbing, though, were the members of the Minzoku no Ishi Doumei (民族の意志同盟 League of the National Will), a far-right nationalist organisation, dressed in black, and bedecked with red, white and black armbands bearing a certain stylised resemblance to that infamous symbol of European fascism. Chests puffed out and standing in formation, they displayed their colours for all to see. 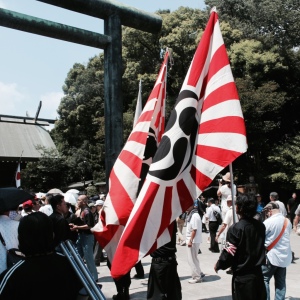 There, in the forecourt before the entrance to the main shrine, we were also greeted by the banner-waving procession of Eirei no Koe (英霊の声 Voices of the Spirits of the Heroic War Dead). Again, here were some impressive examples of DIY flag-making.

Right before our eyes was the explanation we’d been looking for.

Yasukuni is not simply a shrine. It has become an amphitheatre for the revolving acts of nationalist and right-wing groups, intent on redefining a national identity they feel has not only been weakened by a perceived self-flagellating mainstream view of Japan’s wartime history, but also one that is increasingly under threat by the reduced socio-economic prospects of the post-Bubble era, and the growing wealth and geopolitical power of China and South Korea. Instead, Japan’s imperial past is re-conceived as a halcyon era of challenging Western colonialism and inspiring the liberation of the “colonised peoples of the East”. War and expansionism was an unavoidable ultimatum presented by external powers and events. Thus, anything that tarnishes this matrix of historical memory of Japan as non-perpetrator, is quickly denounced as a fabrication or conspiracy.

If this re-rendering of history could be confined to “fringe groups”, perhaps the shrine could be a less contentious site. However, various signs indicate sponsorship of an alternate view of history: at best, one that omits some more controversial aspects; at worst, a concerted attempt at whitewashing.

Standing before the Yushukan (遊就館 – the unofficial Japanese War Museum sponsored by Yasukuni Shrine), statues memorialise some of the more contentious elements of Japan’s wartime and post-war history. On a plinth stands a valiant granite rendering of a ryosai kenbo (良妻賢母) – the “Good Wife, Wise Mother” of imperial era propaganda, who exhorted a vision of Japanese womanhood as both protector and essence of the nation, as well as baby maker for the Imperial Army. Another plaque commemorates Radhabinod Pal, the sole dissenting judge at the Tokyo War Crimes Trial: unfortunately, it seems, more for the fact of his dissent, rather than its substance.

Within the Yushukan itself, exhibits omit key details of war crimes perpetrated by the Imperial Army. The Nanjing Massacre is not mentioned: instead, a small inset briefly mentions the “Nanjing Campaign”, and the strict orders of commanding officers for soldiers to act humanely. Similarly, the “Comfort Women” and the concomitant infrastructure of sexual abuse of women primarily from Japan’s Korean and Taiwanese colonies, are completely overlooked. Entering and exiting the building, you are greeted and farewelled by the nondescript obsidian engine car of the Thai-Burma railway: again, there is no mention of the long marches, forced labour, or the route’s alternate name, Death Railway. 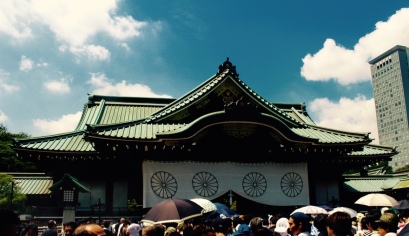 Back under the canopy of trees lining the ceremonial path, amidst the dappled sunlight, I had to stop for breath. In reflection, I shouldn’t have been surprised by what I saw. There are sites of remembrance like Yasukuni all over the world. They are politicised, and they invariably present a certain edited view of history that plays to the sympathies of their main supporters. Whether it’s the American Civil War, or the Russian advance on Berlin in 1945, or Japan’s military expansion: when paying respect to their deceased loved ones, people don’t want to think of war crimes, rape, exploitation, and the ignominy of war. We don’t want to think about the gruesome details of the everyday campaigns that see human turn on human, and our own sense of “humanity” reduced to some primeval hunting force.

I think memory will always be edited to an extent, regardless of who plays the editor. The editing process becomes problematic, however, when politicians and influential social actors legitimise it. For China and South Korea, Yasukuni itself is symbol of a traumatic episode of national history. Visits by Japanese political elites, regardless of whether in a personal or official capacity, further render the narrative a continuing reality of unresolved tension. This year, it wasn’t just the fringe nationalists who were present. Fifty-seven members of the ruling Liberal Democratic Party (LDP), especially members of the conservative Diet Members’ association, the Japan Conference (Nippon Kaigi 日本会議), including the LDP’s policy chief Inada Tomomi, and right-wing Tokyo Governor  Ishihara Shintaro, attended the official commemorations, while Prime Minister Abe sent his aide as a proxy.

While this marks a significant departure from the precedent of Prime Ministerial and senior government minister visits to previous VJ-Day commemorations, such visits nevertheless serve to perpetuate perceptions of support for a more revisionist interpretation of history among key government figures, especially amidst moves to make school history courses more patriotic.

More secular and apolitical sites of remembrance do exist. There is a national cemetery, and the Budokan – where the Emperor and Abe spoke on August 15 – is a mere 200 metres from Yasukuni. Nevertheless, the shrine maintains a certain magnetism in a political environment where history is debated just as fiercely as the consumption tax and Article 9.

At the end of the day, however, Yasukuni is just a building, set in some well-maintained gardens, in central Tokyo. Like the trees lining the ceremonial path to the worship hall, however, different political actors and civil groups, all with their own interests, jostle for attention, scattering and limiting the light that can shine through to the path below. The komorebi of Yasukuni Shrine may be a relief on a mid-summer’s day, but you can’t help but wonder if the canopy will close up above you. I just hope the sun keeps on shining.

Nick, is studying a Bachelor of Asia-Pacific Studies / Bachelor of Laws (Hons) at the Australian National University.