In the Philippines, crime will continue to spring out of the neglected margins 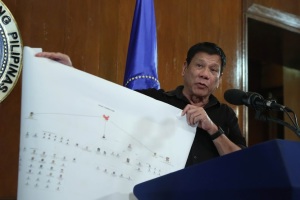 President Duterte shows a copy of a diagram showing the connection of high level drug syndicates operating in the country during a press conference at Malacañang on July 7, 2016. Image taken under a creative commons license from Flickr.

Miguel Galsim is a fourth year student studying a Bachelor of International Relations & a Bachelor of Middle Eastern and Central Asian Studies at the ANU.