Human costs of the sacred cow

India is home to over 200 million cows, more than any other country in the world. They roam freely on the streets, unfazed by the surrounding cries of street vendors and incessant tooting of horns as they go about their business. It is not uncommon to find that a cow has caused a traffic jam by wandering into the middle of a busy intersection.

Almost 80 per cent of India’s 1.3 billion human citizens are Hindu. Cows are regarded as sacred in Hinduism, which explains why they seem to have a license to do as they please.

The cow’s gentle nature embodies the religion’s “do no harm” principle and forms part of the reason they are held in such high esteem. Ironically however, it is the humble cow that is at the root of widespread controversy and violence throughout India. 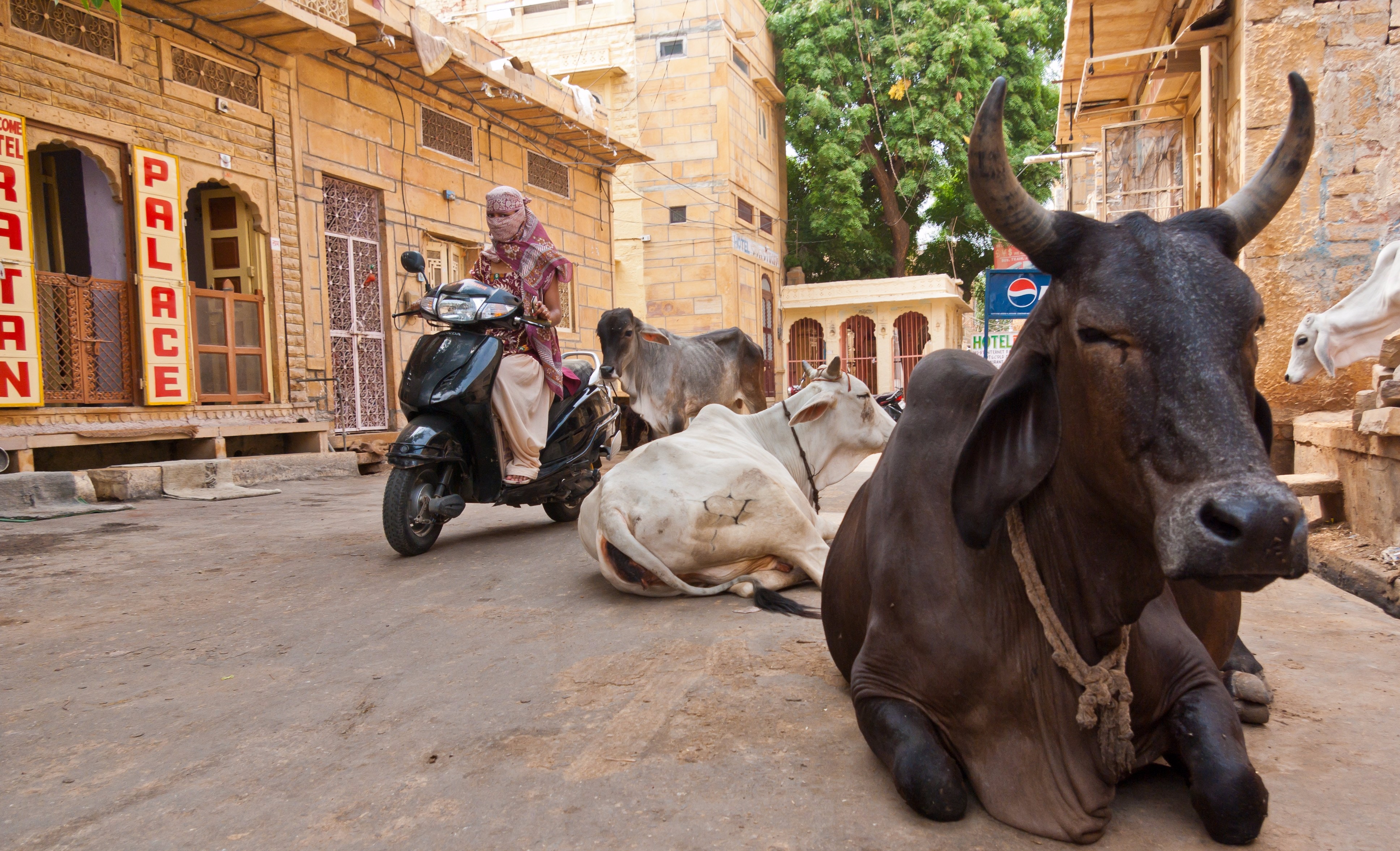 A small herd of urban-dwelling cows inhabiting a street in Jaisalmer, India

Cow slaughter is banned in 24 of 29 Indian states. Following the government’s recent crackdown on butchers in the northern and western states of Uttar Pradesh and Gujarat, restrictions have tightened further. The butchers are suspected of selling cow meat, instead of the permitted water buffalo meat.

As India’s largest meat-producing state, the beef ban comes at a great cost to many citizens in Uttar Pradesh who rely on the meat trade to make a living.

Since the election of right-wing chief minister Yogi Adityanath last month, hundreds of meat shops and slaughterhouses around the state have been forced to close. Most of the slaughterhouses are owned by Muslims, who make up 14 per cent of India’s population.

Authorities claim that the new restrictions are only aimed at shutting down illegal businesses, however locals believe they are being unfairly targeted. Even small shops selling only goat, sheep and chicken have been closed, despite these meats being legal to trade.

Many in Muslim communities have earnt their livelihoods through the meat trade for decades and do not have any other skills to make money. Already poor before the new restrictions, these families now face even greater hardship and uncertainty.

It is not only Muslims who are being impacted. The resultant meat shortage in the state has also led to Hindu workers employed in legal abattoirs facing the prospect of losing their jobs.

In addition to the crackdown in Uttar Pradesh, Prime Minister Narendra Modi’s home state of Gujarat last week increased the penalty for cow slaughter to life imprisonment. Anyone convicted of even transporting, possessing or selling beef will now also face up to ten years in jail.

Risks of severe legal punishment for cow slaughter are not the only factors sending butchers out of business. Following the new laws, meat shops around the country have been vandalised and set alight, leaving many involved in the meat trade fearing for their lives.

It is not the first time such violence has erupted due to controversy over cow slaughter.

In 2015, a 50-year-old farmer from Uttar Pradesh was violently murdered by a mob after being accused of slaughtering and eating a cow. The man was dragged from his bed and bashed in the head with a sewing machine, before being repeatedly kicked, stabbed and beaten with bricks in front of family members. Police later revealed that the meat the family had been consuming was mutton.

Last year, two Muslim cattle herders aged 15 and 35 were brutally tortured and hanged on their way to a livestock fair. The assailants are believed to be Hindu radicals who strongly opposed cattle trading.

Despite its stringent laws on cow slaughter, India paradoxically remains the world’s largest exporter of beef. The beef industry claims that this is all buffalo meat, which is not prohibited in most states. However, many suspect that at least some cow meat is being smuggled out of the country.

This is certainly the case along the India-Bangladesh border, where the beef ban has indirectly resulted in the establishment of an illegal cattle smuggling trade. The high demand for beef in Bangladesh means that those willing to endanger themselves (and their cows) by navigating the dangerous river crossing fetch a high price on the other side. This is not only resulting in numerous human fatalities, but is also a counterproductive outcome of the laws aimed at protecting cows.

Whether or not they are achieving their purpose, there is no doubt that the newest regulations will impact thousands. And worse, the beef ban disproportionately burdens poor and disadvantaged groups for whom affordability renders beef a dietary staple.

By widening the gulf between Indian communities, the new regulations have inadvertently created a chasm into which humans and cows alike are liable to fall victim.