Record number of female candidates in the 2016 Samoan general election

Mitiana Arbon reflects on the growing strength of Samoan women parliamentary candidates in the current general election. Is the result of the quota system in action or shift in attitudes towards women in Pacific politics?

In 2013 the Independent State of Samoa’s constitution was amended to reserve a minimum quota of 5 of the 49 parliamentary seats for women, becoming the first independent country in the region to implement such measures. With the General Election only a day away, Samoa faces its largest number of female candidates to date. Of the 164 candidates currently running, 24 are female. This is more than double the candidates that ran in the 2011 elections. Beating the past record of 18 candidates in the 2006 election. Current running candidate Minister Fiame Naomi Mata’afa, is the Pacific Region’s longest serving female Parliamentarian.

The quota operates under a system often described as the ‘best loser’. If only 4 female candidates are elected out of the 5 seats, the next highest-polling unsuccessful female candidate will occupy the additional seat, ensuring that the minimum quota of 5 is always met. If no female candidates win any of the 49 seats, the same formula will be triggered, increasing the number of seats in parliament to 54. This system, initially unpopular, has begun to slowly gain traction nationwide, reshaping perceptions around gender roles and norms in politics.

More work is still needed to shift mindsets, and maintain momentum for gender equity in Samoan national politics. Despite the ruling Human Rights Protection Party’s open support for female candidates, Prime Minister Tuilaepa Sailele Malielegaoi once lectured potential female MP candidates on the importance of putting familial and motherly duties over political ambition. Some politicians have gone further suggesting that reserved seats may in fact be a deterrent to increasing women’s representation in parliament, acting rather as a ceiling than a floor.

Even with reserved seats, women face many structural and cultural challenges to achieving candidature in an election. The most obvious being the restriction that a parliamentarian must be a holder of a traditional matai (chiefly) title. Whilst this has helped preserve and protect traditional village political entities, it has in the past been open to manipulation, through title splitting across family members and support groups.

The matai restriction has proven intensely constricting to female candidates, considering over 48 percent of the population is female but their share of matai titles is only 11 percent. Additionally, there are 10 villages nationwide that restrict the holding of matai titles to men only. 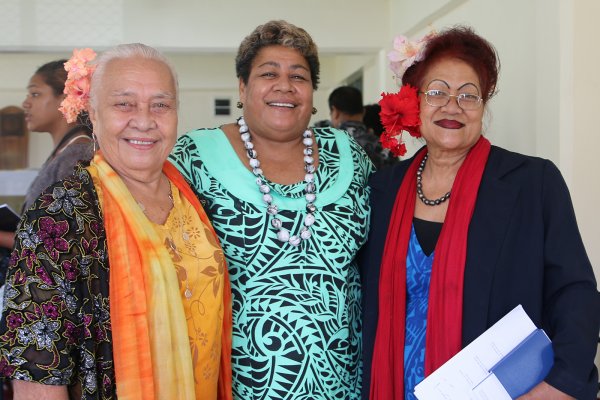 So what is next for female candidates? While the ruling HRPP is expected to win tomorrow’s election, the Increased Political Participation of Women in Samoa Program is optimistic of at least seven female candidates. The record number of female candidates in this year’s election is a tribute to their determination in light of the structural and cultural challenges that they face.

However, this is only the start. The Pacific region as a whole continues to struggle with one of the world’s lowest levels of female representation in parliament averaging only 5.5%. Let’s hope that the election of Dr Hilda Heine as President of the Marshall Islands and first female head of state in the independent Pacific heralds a new political future for all Pacific women.

Mitiana Arbon is a PhD student at the Australian National University, looking at art in the Pacific. He holds a Batchelor of Arts (Hons) and a Batchelor of Pacific studies