The debate over phosphate for Makatea

In late November-2016, the French Polynesian Présidence at Papeete played host to an important, and well-attended, exhibition titled Makatea: Past, Present, Future.

From its opening, the exhibition transformed from a site of historical memory into a site of heated debate. Landowners, office-holders, young job seekers and environmentalists came together to articulate their visions and concerns over Australian engineer Colin Randall’s proposals to re-open mining industry on Makatea for its phosphate reserves.

The exhibition coincided with the Tuamotuan island’s 50th anniversary of the end of phosphate mining. One could be excused in thinking the exhibition’s purpose was purely memorial – a nod to a bygone era where phosphate mining was a pillar of the French Polynesian export-led economy. This exhibition however was imbued with political motivations. It was the brain-child of Colin Randall, who after being a mainstay in the Hunter Valley coal mining industry for forty years, now turns his attention to French Polynesia in order to gain concessions from the Government to re-mine the island of Makatea for its residual phosphate reserves.

Attendees at the Makatea: Past, Present and Future Exhibition

In order to receive the concession it is incumbent upon Randall and his company to demonstrate their project has the support of te fatu fenua (people of the land). The exhibition thus turned into a four-day long public relations exercise where Randall attempted to assuage concerns about the adverse impacts of future mining.

According to Randall, in thirty years’ time his project will have rehabilitated 1,600 ha of land, created a functional port, an airstrip, provided the island with water supply and waste management, and will have laid the foundations for a future based on eco-tourism and agriculture. For Randall, there is no such thing as exploitation without rehabilitation, and his plan is to rehabilitate each parcel of land as the mining proceeds. He labelled rehabilitation efforts on Nauru—a constant touchstone over the four-days—a ‘disgrace,’ and urged people to look towards Christmas Island as a model.

While Randall is optimistic his rehabilitation plans will succeed, others have expressed scepticism. Filmmaker and naturalist Michel Huet likens them to a science-fiction novel, a completely crazy project. While some locals were encouraged by the future benefits of an airstrip, others were discouraged by the adverse impacts of mining on their health. Examples of this were cited, such as that of 2014 when the Israeli Government pulled the plug on a proposed mining project at Sde Brir owing to the potential ill-effects of air pollution on people’s health in the nearby town of Arad. 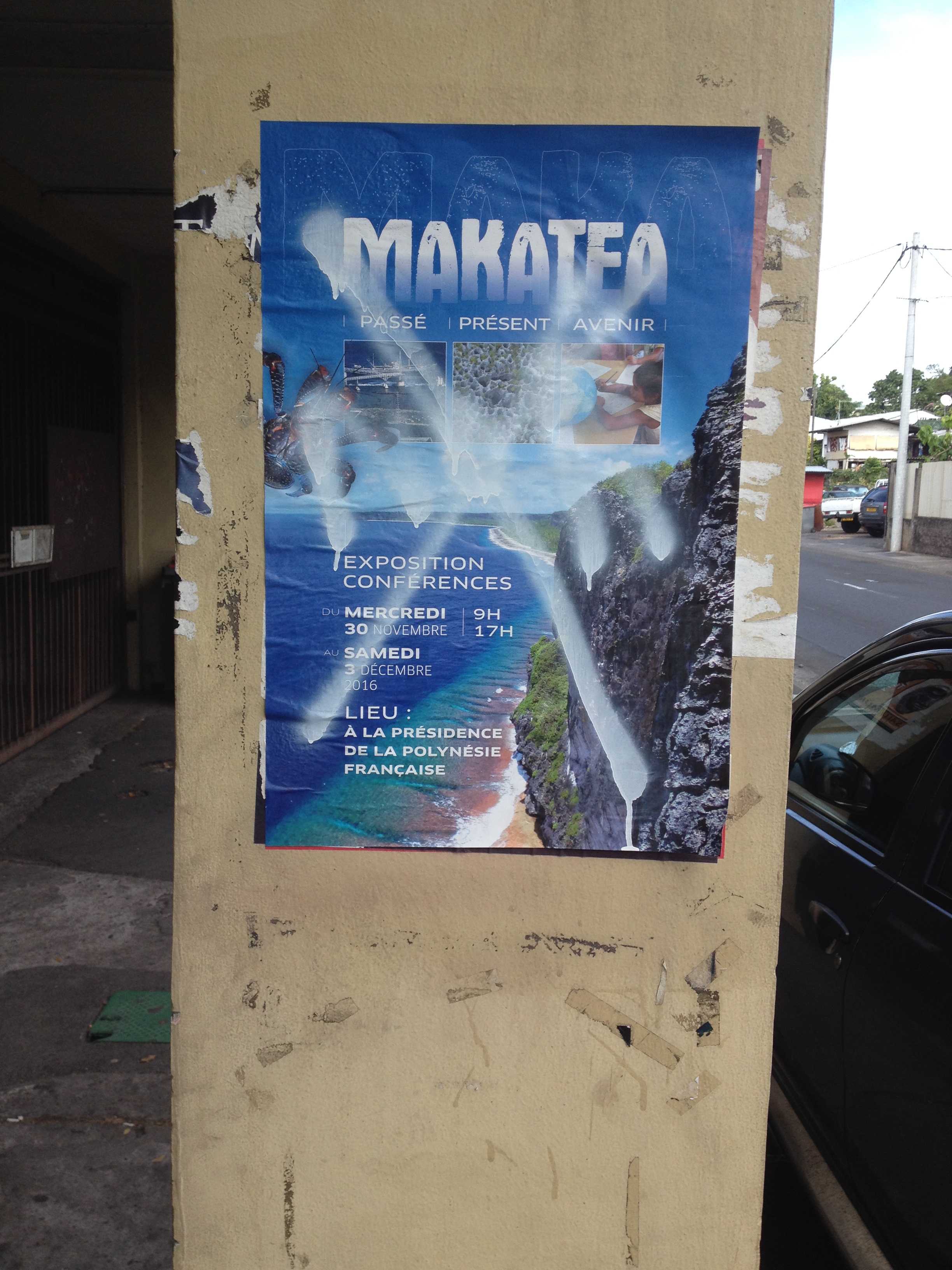 Posters advertising exhibition crossed out and tagged with ‘non’ 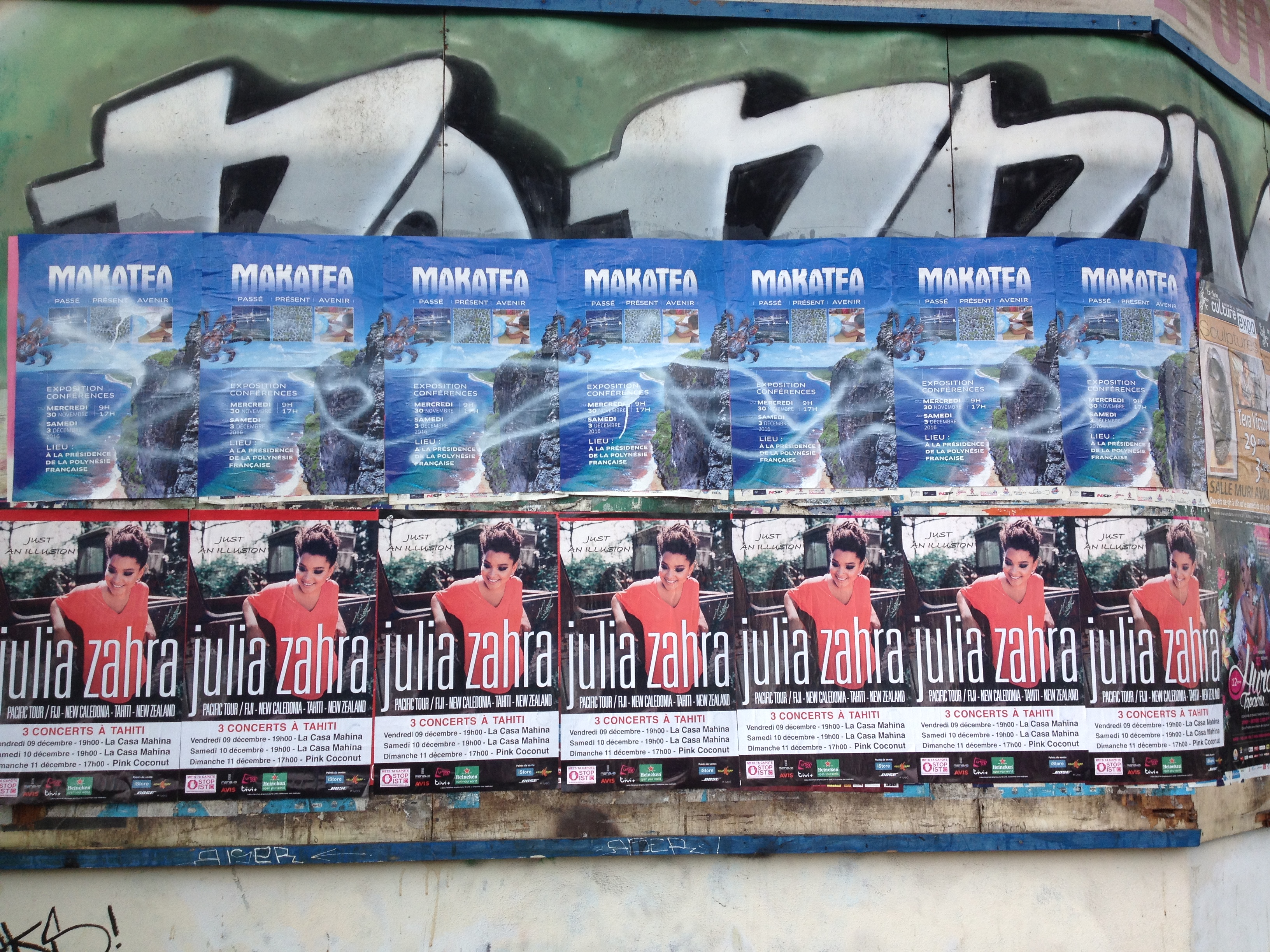 Broader environmental arguments may not have entered the conversation at the Présidence, but the wider implications of continued phosphate dependency have many in the scientific community concerned. Environmental scientists are worried that fertiliser run-off, eutrophication of waterways, and subsequent algal blooms will lead to worsened hypoxia, that is, a higher incidence of global “dead-zones” or regions where life cannot be sustained.

Regardless of one’s opinion on the project, it has clearly split the community. While mining is supported by the mayor of Makatea, Julien Mai, and mayor Teina Maraeura of Rangiroa, the commune to which Makatea belongs, during the exhibition there was constant anti-mining protests  surrounding the Presidence. A strong contingent of around eighty protesters were present on the first morning of proceedings despite the rain, with the anti-mining groups Te Fatu Fenua no Makatea, led by Sylvanna Tupuhina Nordman, and Rupe no Makatea, led by Danny Pittman, both in sync as they cried out-loud “Do Not Touch Makatea!” 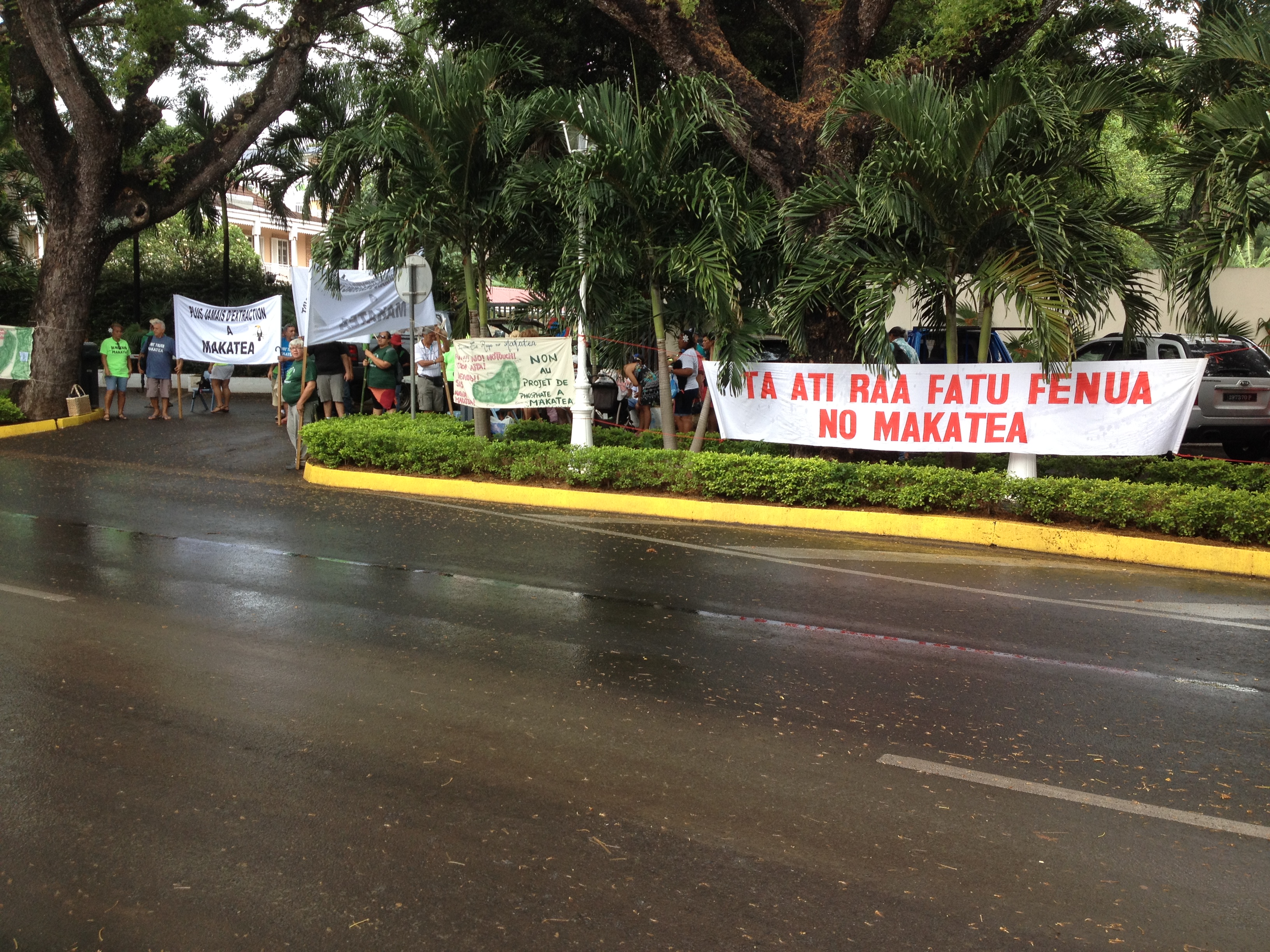 To Randall’s credit, his exhibition provided an arguably overdue chance  for people to express their hopes and fears for the island. Talks were often heated and tempers were regularly stretched, but dialogue was shared amongst different generations. Many of the young Makatean men in attendance expressed their preference for the project owing to the opportunities it would provide them for training and employment.

For those in opposition to the project, environmental concerns outweigh any short-term economic benefits. According to botanist Fred Jacq, Makatea is a “hot spot” for biodiversity. The endangered Polynesian imperial pigeon, known locally as the Rupe (ducula aurorae), which having disappeared from the rest of French Polynesia, has seen its numbers increase on Makatea since mining ceased. Left to their own devices, birds such as the Rupe dispersed seeds across the island,  revegetatating and repopulating the once-mined areas to such an extent that Bird Life International has labelled Makatea an Important Bird and Biodiversity Area.

Rupe Bird on Makatea (From: www.rainforest-rescue.org/petitions/1075/save-the-noah-s-ark-of-the-south-pacific) 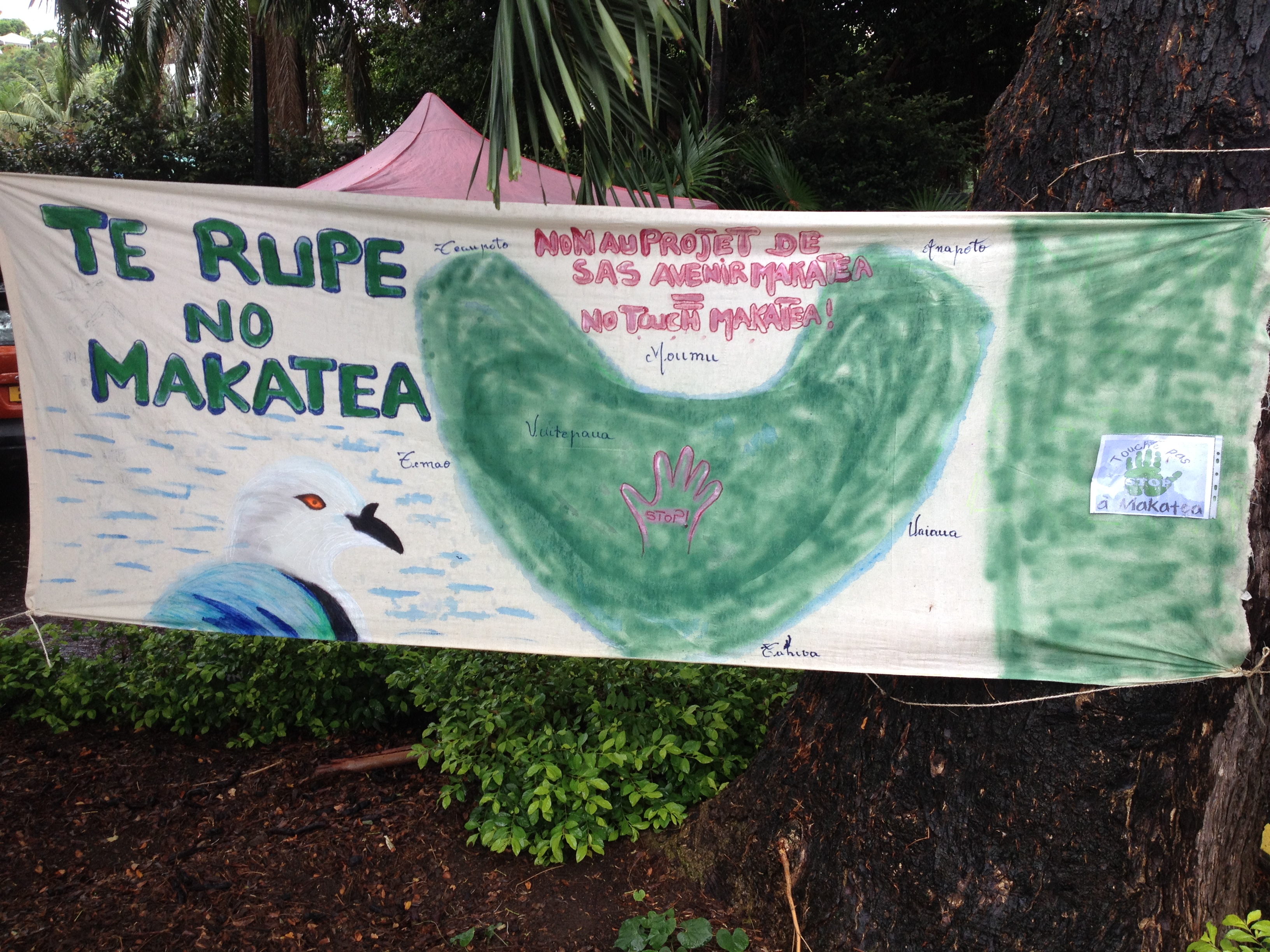 A Rupe featured on protest banners

The prospect of renewed mining has endangered this status, and has pushed the two anti-mining groups into vowing their continued opposition to the project. Meanwhile an online petition to ‘save the Noah’s Ark of the South Pacific’ has so far attracted 140,000 signatures. Randall repeatedly said he intends to walk away if te fatu fenua do not want him there. Yet for somebody who has expended such a significant amount of time and  resources, it is difficult to say how true these words will prove to be. Whatever the outcome, the next coming months of 2017 will be critical in determining the future of Makatea and its inhabitants.

Nicholas Hoare is a PhD Candidate in the School of History at ANU where he is researching the history and contemporary politics of phosphate mining on Makatea, French Polynesia.