North Korea's Mass Games is much more than a mere spectacle

As the world marvels over Olympian feats in Rio, Tammy Cho explores why the Democratic People’s Republic of Korea (DPRK) passes another year without a Mass Games.

The Mass Games is a 90-minute spectacle of coordinated gymnastics, acrobatics, theatre and dance set to nationalist music that tells the story of North Korea’s revolutionary struggle.

The Games are the world’s largest gymnastic display with some 100,000 people participating in the performance. The show demonstrates the regime’s might to its people, and its mammoth scale and coordination exhibits the power of collectivism. 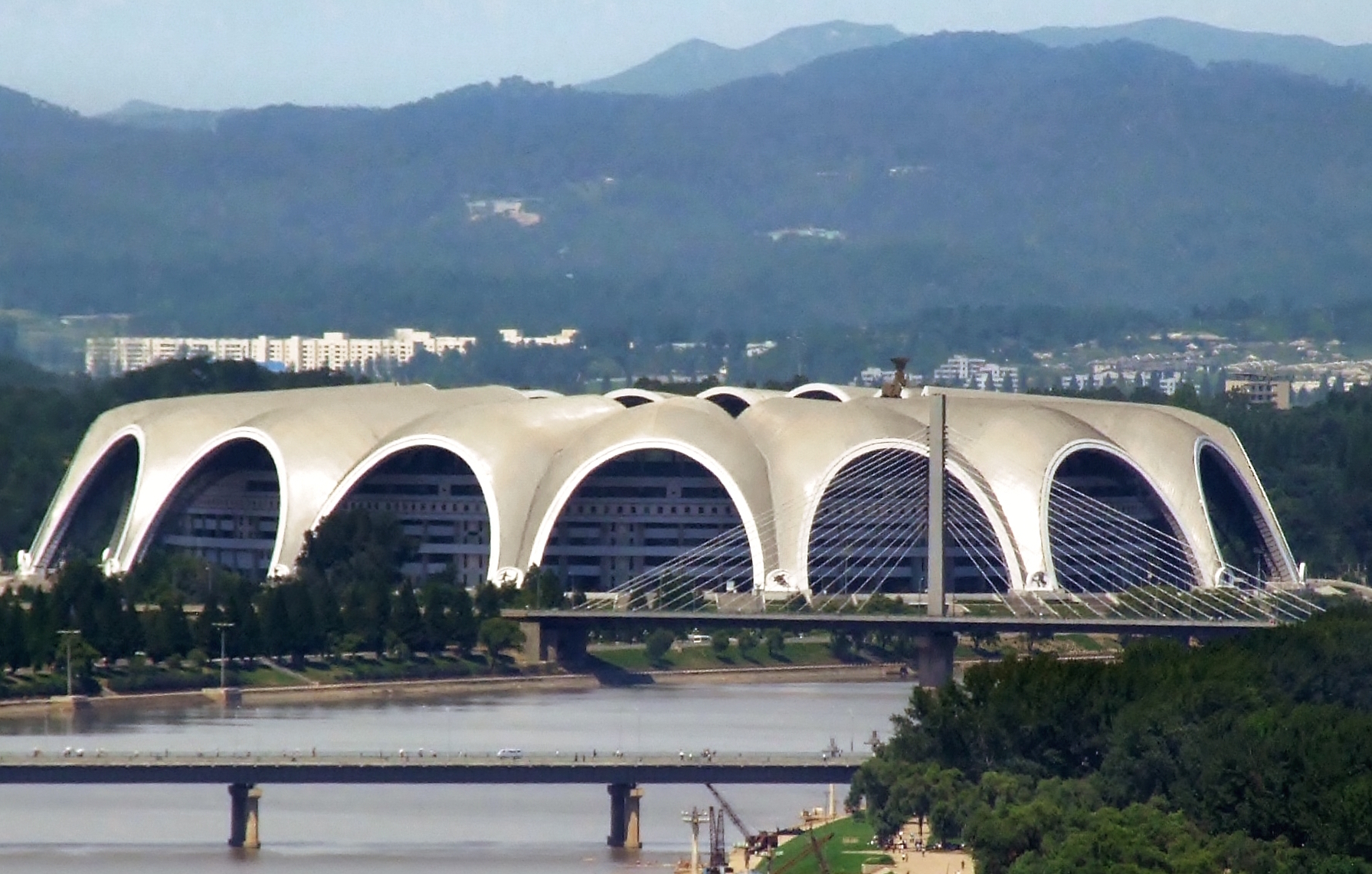 The Games are held in Pyongyang’s May Day Stadium – the largest stadium in the world by capacity.

The show’s annual title and theme is ‘Arirang’, a Korean folk song about two lovers who are torn apart by unknown forces – a symbol of Korea’s distant history and the dividing of the Korean peninsula. The precision and coordination of movement are an awe-inspiring visual display, but also embody the mass-ideology of the state.

Participants are expected to devote their lives and train for months, while spectators witness the power of conformity — teaching the people the value of obedience and subjugating the individual for the collective good.

Take a glimpse into the jaw-dropping theatrics and coordination in the short video below.

The Games perpetuate the nationalist narrative in its storyline and use of familiar propaganda symbols. Crushed and exploited by wicked foreigners, Kim Il-Sung (born atop Korea’s highest peak, Mount Baekdu) rises to lead North Korea to victory, and the people prosper under his leadership. 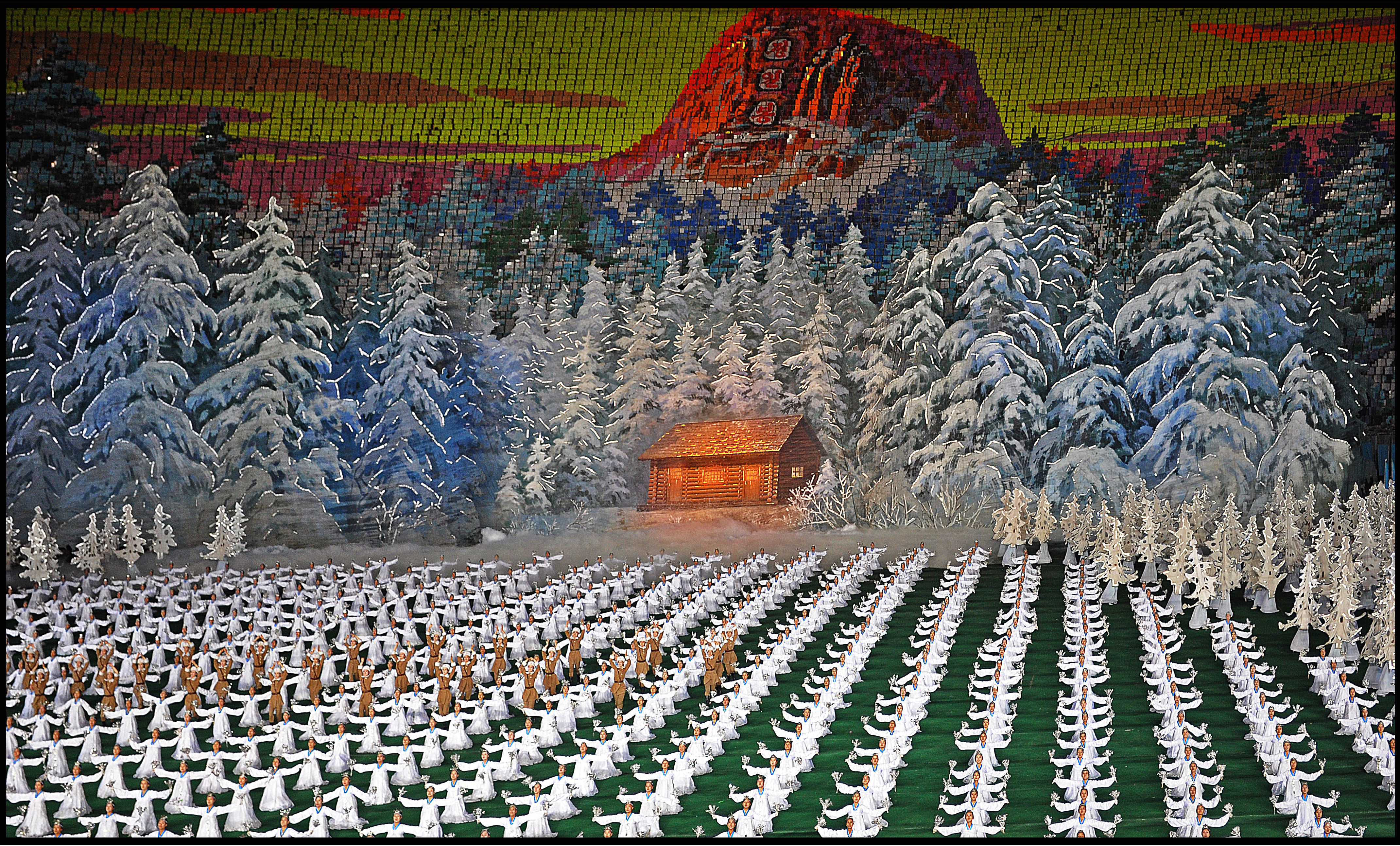 The cabin log on Mount Baekdu where Kim Il-Sung is said to have been born. 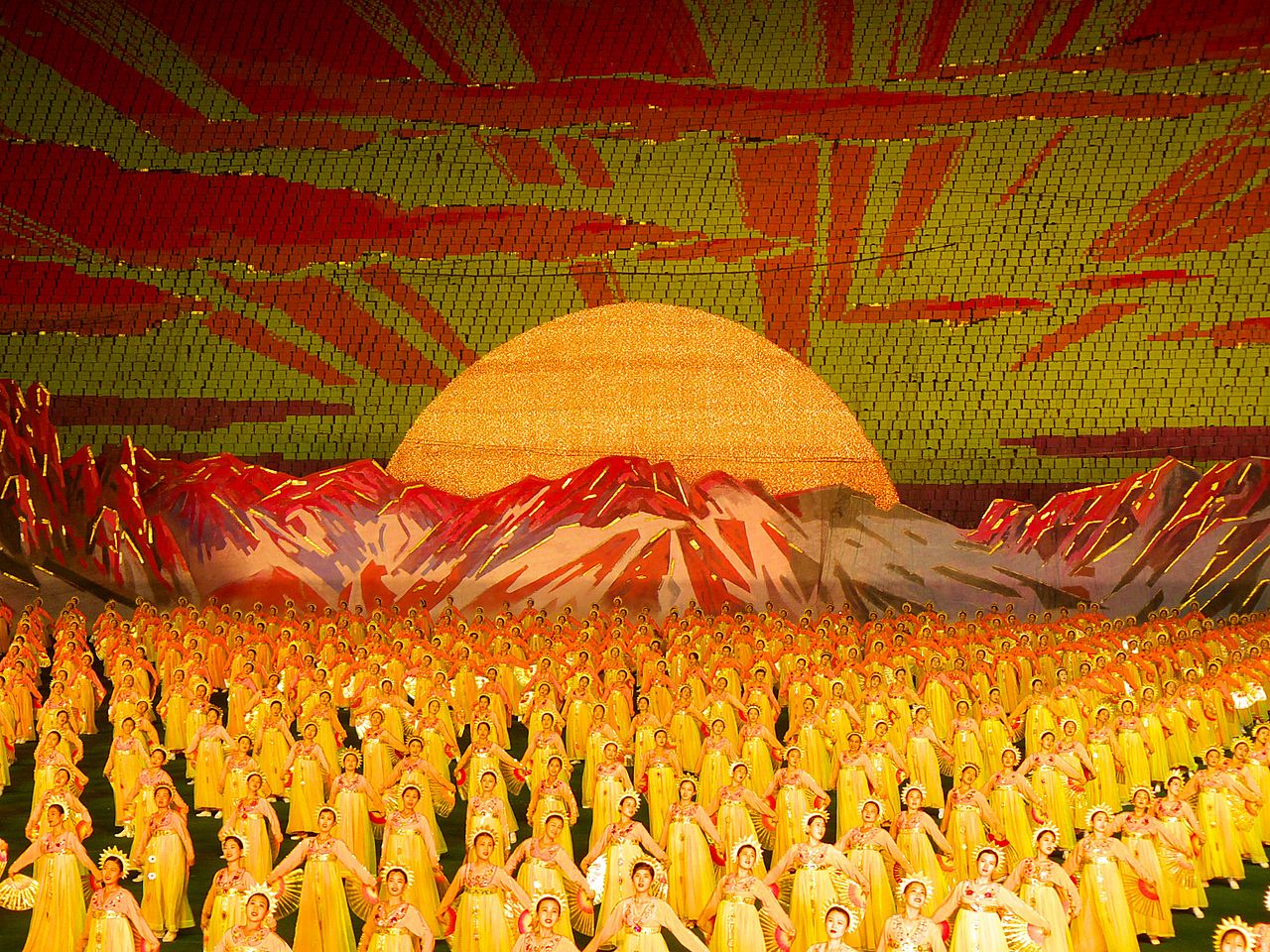 The rising sun is a symbol of Kim Il-Sung, symbolic of the deification of the Great Leader. 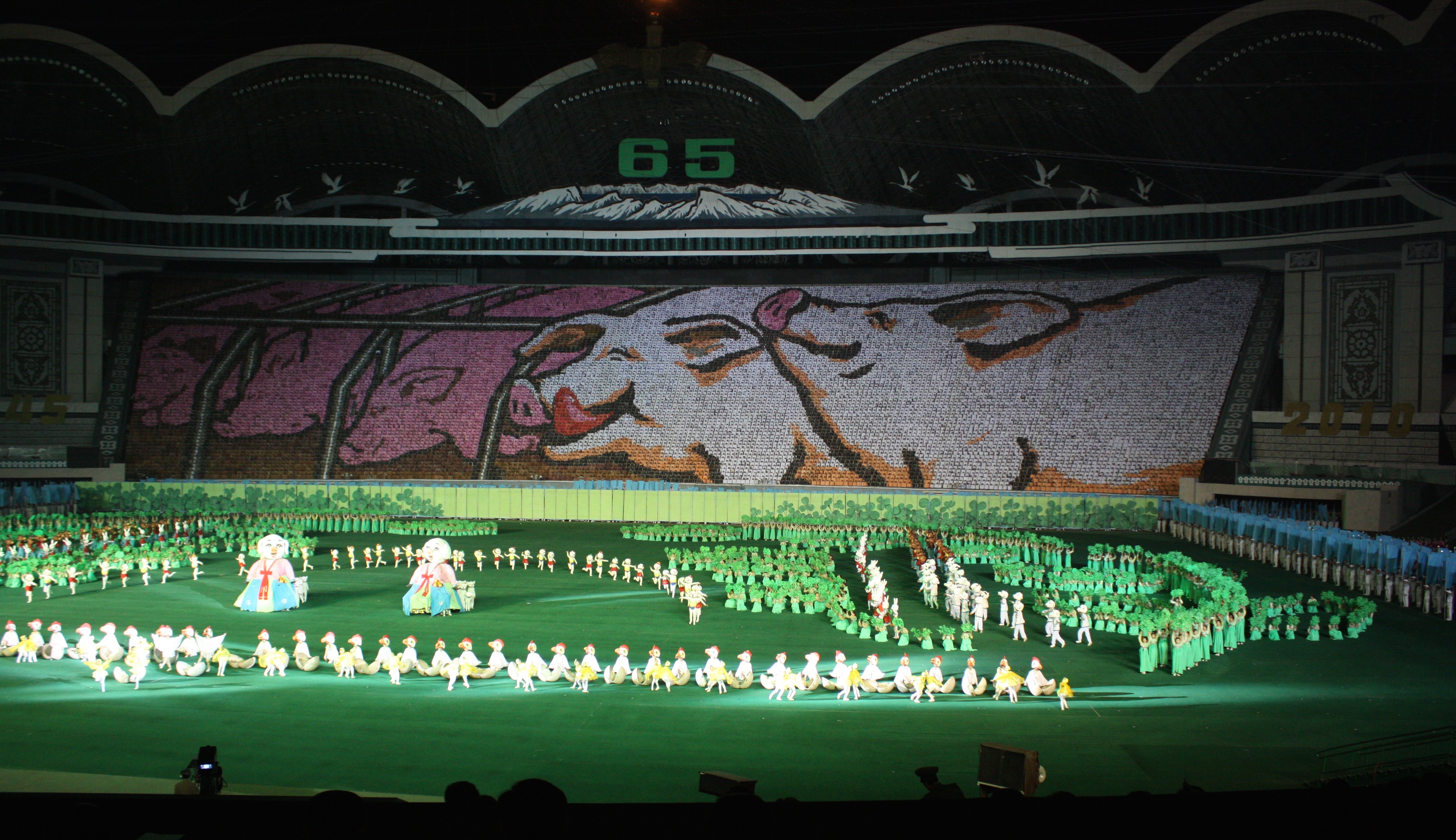 The pigs act as a symbol of agricultural wealth and farming prosperity that have followed under the leadership of the Kim dynasty.

Many of the Mass Games performers are children. In 1987 Kim Jong-Il declared On Further Developing Mass Gymnastics that it was ‘important in training children to be fully developed communist people’, in teaching ‘a high degree of organisation, discipline and… to subordinate all their thoughts and actions to the collective.’ 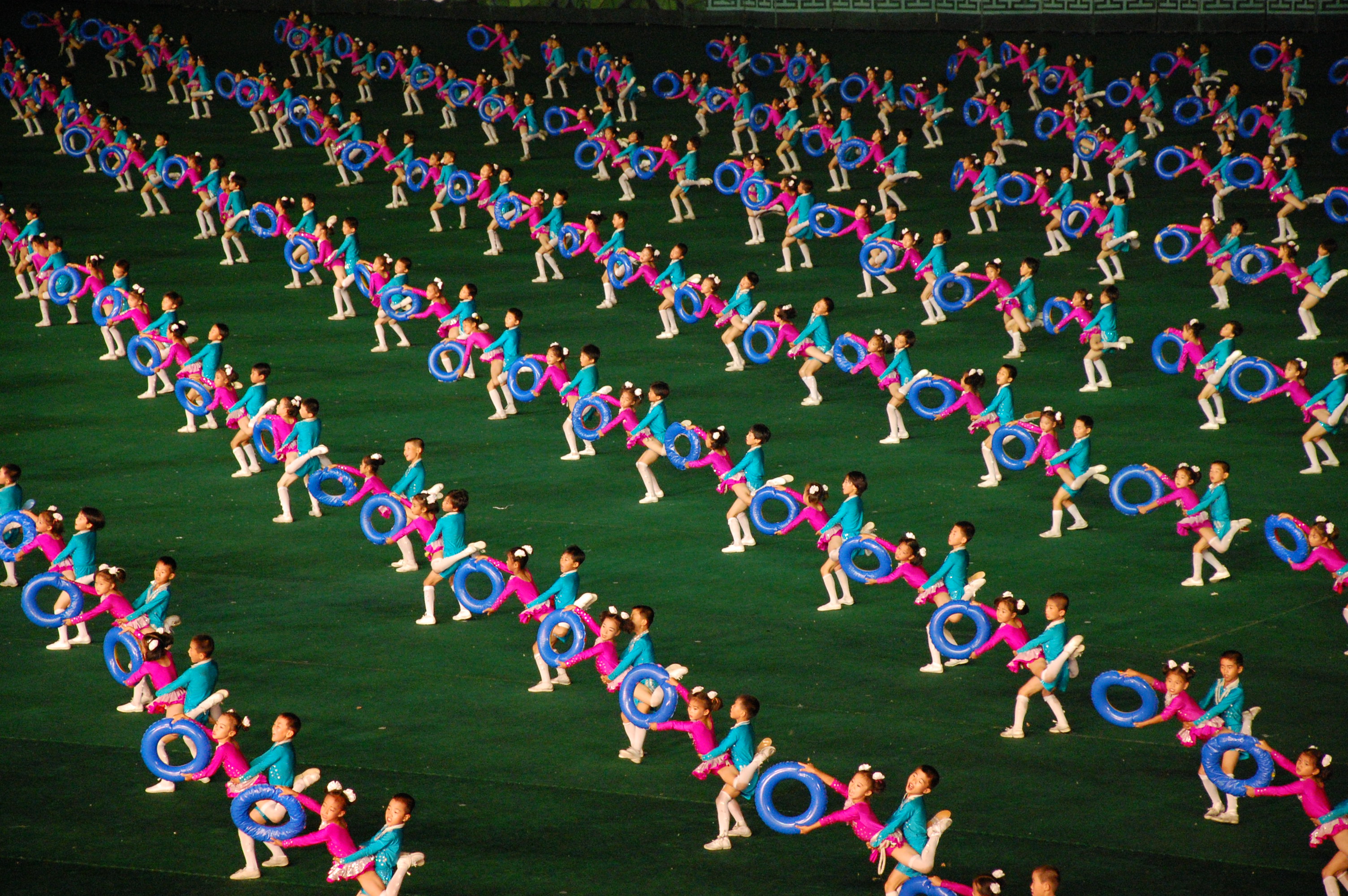 For example, as shown in the photos and video above, the ‘screen’ at the back of the stadium is comprised of 20,000 school children holding and changing cards in perfect time – each child’s card creating a ‘pixel’ of the image. 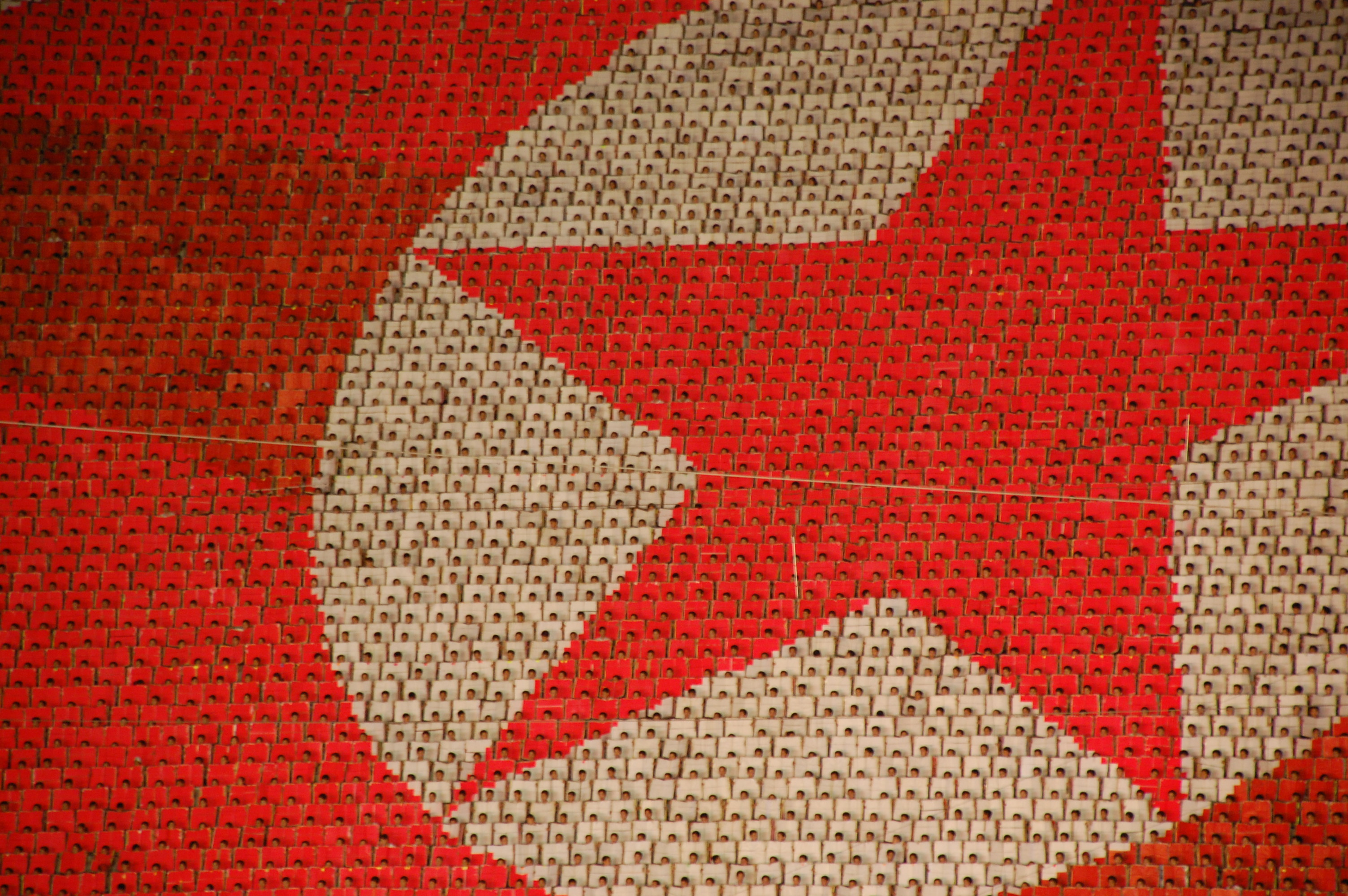 Children holding cards to form an image of a red star – the universal symbol of communism and North Korea’s symbol for revolutionary tradition.

Another year without a Mass Games is significant. While a 2016 Games may still run, they are traditionally performed between the months of July and October and there is no known preparation for them so far.

The failure of the DPRK government to deliver a Mass Games is more significant given the especially volatile climate of current DPRK politics and foreign relations. Heightened UN sanctions against North Korea, fears of China distancing itself from the DPRK with Xi Jinping and Kim Jong-Un yet to ever meet, and sharp economic falls have increased pressure on the DPRK to secure national stability and regime legitimacy.

Given this political context, a key question remains: why has the government decided not to reignite nationalist loyalty with a 2016 Games? 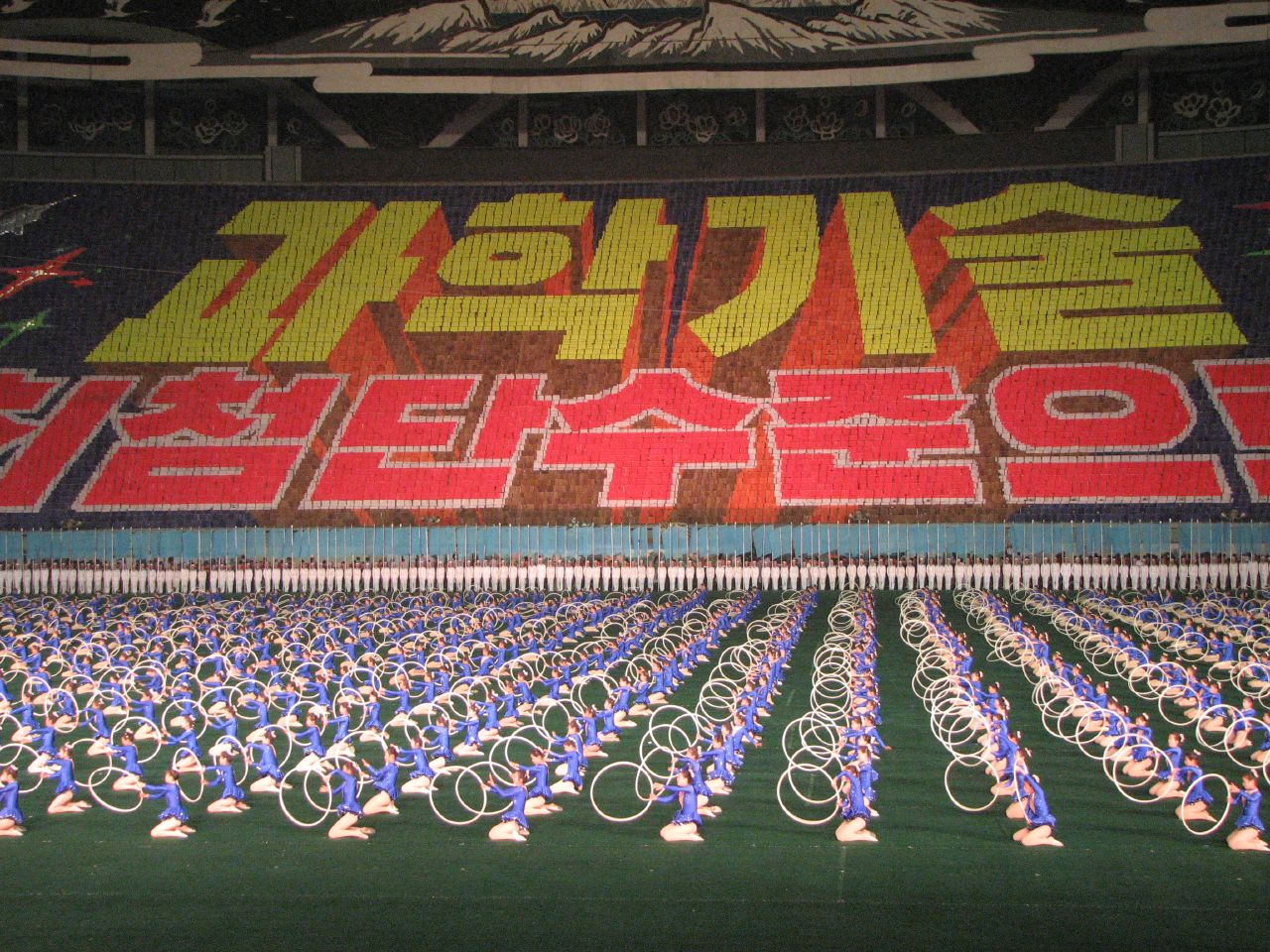 “Heading towards state-of-the-art science and technology”.

One reason may be greater economic desperation within North Korea.

In the past, despite widespread famine and stagnant socio-economic development, the government would allocate massive resources to state demonstrations and the Games. Monumental statues and parades in Pyongyang’s Kim Il-Sung square would create a sense of worship and misrepresent the prosperity of the state.

However, the decision not to run the Games possibly for a third year could indicate an unprecedented low level of resources. On top of this, North Korea’s growing number of nuclear tests and recent ballistic missile launches could indicate that military threats and firepower are now the primary mode of internal nationalist propaganda — with potentially dangerous ramifications for the international community.

“Wisdom of the people”

The North Korean Mass Games is much more than mere spectacle. The failure of the DPRK to deliver a Mass Games for the third year running demonstrates the changing priorities and challenges for the regime.

Although the scale and coordination of the performance is awe-inspiring, the Mass Games is much more than a symbol of international unity or sporting rivalry that we are accustomed to seeing in spectator-filled stadiums.