To today’s youth in Japan, the fast cars and pricey whisky abundant during the bubble of the 1980s must seem like an alcohol-fuelled delusion. Young workers, sobered by the continued decline of the Japanese economy, face a much starker reality.

During the bubble, Japan’s economy maintained a strong average growth rate of 4% despite a lack of local resources and high global oil prices. By the late 1980s the value of the Japanese Yen and real estate market had become so high that the Australian government sold one-third of the land upon which its embassy was built for A$649 million as part of a plan to reduce its national deficit.

This boom was not to last.

Known as the Lost Two Decades, the period following the 1980s saw Japan’s market stall and deflation take hold. Japan’s economy is yet to recover from this contraction and the average annual growth rate between 2011-2015 was a measly 0.7%. Japan’s GDP to debt ratio now stands at 240%, the highest in the world (compiled from the World Bank database).

These are the grim conditions which young people trying to find work now confront. Many of them, due to increasingly outdated business customs and hiring practices, are unable to find regular employment and live paycheck to paycheck. With limited job security and career opportunities, these young people have little ability to pursue their dreams and gain their independence.

In 2007, Bloomberg Business published an article entitled “Japan’s Lost Generation” recounting the difficulties facing young job seekers: “…Sadaaki Nehashi. The 31-year-old contract worker at delivery company Yamato Transport makes just $1,100 a month sorting packages—about a third of the average income for full-time employees in Japan…He lives at his parents’ modest home in central Tokyo. “I’ve had to lower my expectations a bit,” says Nehashi, who graduated from university with a degree in marine biology in 2000. “But if I had waited around for a full-time job, I might have been waiting forever.”

These young people who are either unemployed, or contracted to work low-paid and low skilled jobs are known as Freeters (フリ-タ) in Japan. Freeters reflect a broader trend in developed countries in which the transition from school to work has become far more complex and often lengthy.

A number of different factors are responsible for this tendency including the growth of the service based sector and a rise in the demand of employers for flexible labour and contract workers.

It is difficult to estimate the exact number of freeters in Japan as the precise definition of the term varies. One White Paper on National Life published in 2004 estimated the number of freeters in 2001 to be about 4.17 million, more than one-fifth of the population between the age of 15-34. 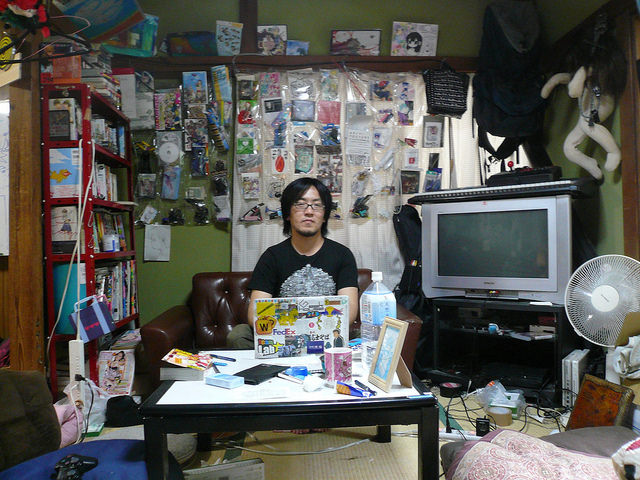 The Japanese Institute for Labour identifies three different types of freeters based on the reason for their lack of regular work.

Others, known as the “dream-pursuing type” chose to pursue goals outside the conventional ‘salaryman’ career path and forgo regular employment. Traditional Japanese white-collar workers are expected to work gruelling hours and Karoshi (過労死), literally translated as “death by overwork” is a medically recognised condition. Instead, some young workers choose the relative freedom and ease of casual work so that they can pursue their other interests.

The final type known as the “no alternative type” are those young people who are unable to find a regular job before they graduate high school or university. In the Japanese workplace, a high degree of job security is protected by case law and is a core part of social norms. Coupled with traditional hiring practices in which almost all of new employees are hired in the final year of their university degree, it is extremely hard to find a full-time job after this period.

The Japanese government has taken some steps to curb growth in the number of freeters in Japan including providing subsidies to employers to train casual staff who they intend to eventually take on as regular employees.  However, critics argue that these measures do not go far enough. Freeters have little or no workers rights, and due to the nature of the Japanese pension system are unlikely to earn sufficient savings for retirement.

These concerns feed into a wider debate about the effects of Freeters upon Japanese society as a whole.

In an article published in 2005, The Daily Yomuri estimated the marriage rate of male freeters over five years to be about half that of those with regular employment. Due to factors such as the high cost of home ownership and their inability to support themselves, freeters often delay having children.

There is significant concern that this trend will worsen Japan’s aging population problem and place further stress on the already overburdened pension system and faltering economy.

Surprisingly as noted by the Financial Times, in a recent government survey of those aged between 20-29 almost two-thirds of all participants reported they were satisfied-the highest observed level of youth happiness since the survey began in the 1950s.

Perhaps the hangover hasn’t quite hit yet.