The traditional Samoan fale: The Key to cyclone resilient housing in the Pacific?

Traditional architecture be the key to cyclone resilience in the Pacific.

Mitiana Arbon reflects on the future of Samoan community resilience to cyclones through the traditional architectural style of the fale.

While Samoans repair the damages wrought by Cyclone Amos that struck on Saturday night, many are grateful that its intensity and  destruction were less than expected. The widespread devastation left by Cyclone Winston in Fiji – the southern hemisphere’s most violent cyclone to date – has been an important reminder to Pacific Island states of the importance of natural disaster preparedness.

With predictions from the Pacific Climate Change Science Program expecting a cyclone wind speed increase of 11 percent, and rainfall intensity of 20 percent, the time is right to start planning for future disasters. For centuries Samoan villages had harmonised the architecture of the Samoan fale appropriately with the local environment rendering it adaptable to extreme weather events. However, widespread socio-cultural trends of building western style housing have resulted in increasing vulnerability to cyclones.

Although Samoa avoided the direct impact of Cyclone Winston, the 2012 Cyclone Evan devastated Samoa, destroying over 600 homes and killing 14 people. The total economic damage caused by Cyclone Evan was estimated to be equivalent to approximately 30% of the country’s GDP. According to a recent UNESCO report, one of Samoa’s best answers to extreme weather lies within the reincorporation of traditional methods back into contemporary vernacular architecture. 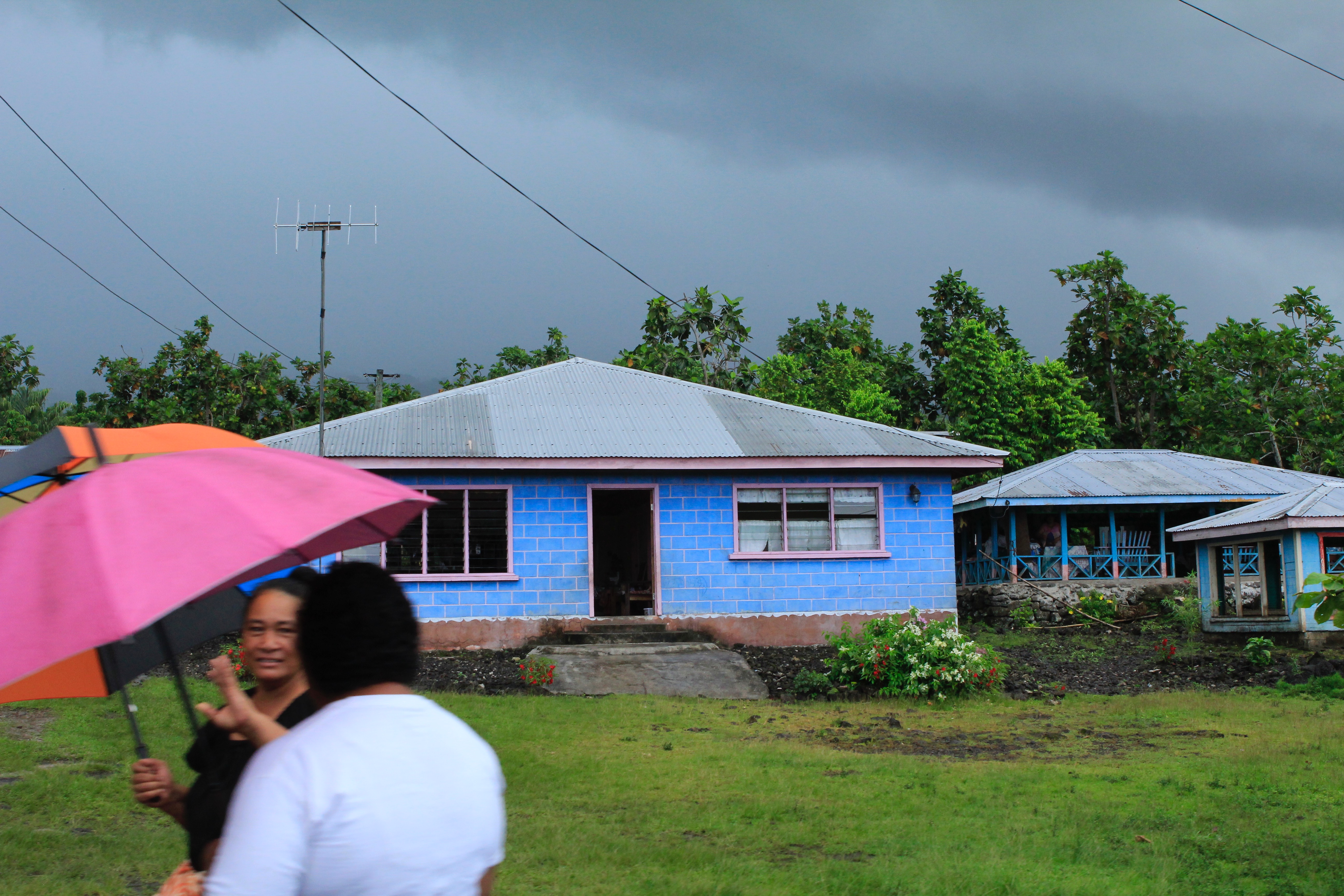 The Samoan fale epitomises the architectural traditions of the islands with the term – fale – actually refering to a range of housing types, charachterised by an oval shape, a domed roof and supported by open pillars. Bounded together in the past by plaited rope from coconut fiber, this has been replaced mostly through the use of nails with corrugated roofs replacing traditional thatching.

Open walled, the fale allows for strong winds to pass through, both cooling the space and reducing humidity. Privacy was achieved through Venetian style woven blinds. The use of coconut fiber rope lashings on the pillars and roof allowed the building to bend and flex under pressure without breaking. In the event of the structure failing, replacement materials are readily available and sustainable, with collapsing structures resulting in minimal injury compared to western style dwellings.

Today, only a third of Samoan buildings continue to retain traditional construction styles. The village landscape of Samoa is increasingly dominated by modern variations on traditional styles, incorporating concrete in exchange for wood, often building on solid bessa brick houses to the back of a modern style concrete fale. These Western style houses are not adapted for extreme tropical weather events. Strong cyclonic winds when met with a vertical brick wall move upwards lifting off the roofs of houses by their eaves, and tearing at the rafters. Torn corrugated iron from roofs are more likely to kill or seriously injure occupants than the softer thatching of the fale.

When Cyclone Evan hit Samoa, it caused over $17.8 million in damage to houses alone; the majority of these being of Western style with roofs being the most commonly damage. Additional recovery and reconstruction costs are thought to have amounted to $20.4 million. Following Cyclone Evan, the Post-Disaster Needs Assessment recommended the enhancement of resilience of communities by reinvigorating the positive features of traditional buildings in Samoa.

Despite the benefits of the Samoan fale, western-style housing dominates the cultural landscape of the islands. This adoption of  western-style housing does not represent an evolution of housing based on pragmatic or enviromental changes in the islands. The Samoan fale has much to offer in terms of sustainability and climate resistance that has been embodied within its design. Encouraging these Samoan indigenous practices of building and planning as represented in the Samoan fale could be key to creating more disaster resilient communities of the future – communities which are able to recover more quickly from severe weather events.