Clashes over gambling in Japan

Large, flashy Pachinko parlours light up the streets of Japan. These are pinball arcades that have marginally circumvented Japan’s anti-gambling laws for many decades. However, Japan’s gambling culture is about to change. The Japanese Diet passed a bill lifting the ban on integrated resorts (IR) – commercial complexes including casinos – last December, and are set to hold an extraordinary session to pass an IR Implementation bill in late September of this year.

The incumbent Liberal-Democratic party (LDP) is largely in favour of expanding the Japanese gambling market. Prime Minister Shinzo Abe has expressed his hopes to implement integrated resorts before the 2020 Summer Olympics in Tokyo in order to draw more tourists to the country and to help revive regional economies. On the other hand, the Opposition (Democratic Party) and the public alike are dubious about the motion. In fact, members of the Opposition walked out in protest during the session last December on the grounds that the bill contains insufficient safeguards addressing gambling addiction.

The former head of the Opposition has also voiced his concerns over the rashness with which integrated resorts are being pushed for, noting that the initial IR Promotions bill was passed in just six hours without a consensus between the LDP and the Opposition. The public has echoed these concerns, fearing that the bill understates problems such as gambling addiction and gambling-related crime. In fact, a national survey conducted on August 7th shows that 22.8% and 66.8% of Japanese citizens are respectively for and against passing the IR implementation bill.

Thorough deliberation of implementing integrated resorts in Japan is crucial considering its existing gambling problem amongst Pachinko-goers. A 2008 national survey found that Japan’s gambling addiction rate was approximately 5.6%, with similar results in a 2013 survey. This is high compared to national survey results of other Asian countries. As of 2011, this includes 0.8% in South Korea, 3.1% in Singapore, and 4.4% in Hong Kong.

How can we hasten IR legislation when we have yet to ensure that Japan will be sufficiently prepared to tackle the problem of gambling addiction? It is crucial that enough time is taken to discuss safeguards before the bill is to be enacted. An example of a country that has done just this is Singapore.

Singapore implemented two integrated resorts in 2010 – Marina Bay Sands and Resorts World Sentosa – both of which have achieved astounding success. Prior to these developments, the Singaporean government had already prepared a comprehensive framework tackling gambling addiction. In accordance with the framework, the newly appointed National Council on Problem Gambling (NCPG) proactively sought public opinion; funded an educational TV series on the issue in January, 2006; and set up a problem gambling counselling helpline with the Institute of Mental Health in December, 2007. Moreover, the Ministry of Health helped establish a National Addictions Management Service (NAMS) in 2008. 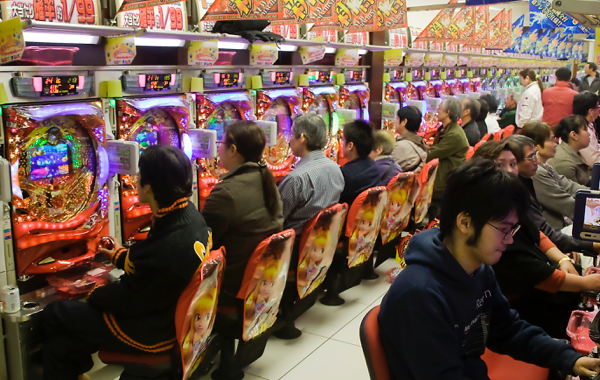 Inside a Pachinko parlour

The Japanese government has appointed a Casino Management Committee to examine gambling issues related to organised crime and money laundering, and has proposed safeguards such as using ‘My Number’ cards to limit patrons’ visits to casinos. The National Police Agency has also pushed for regulations limiting the number of Pachinko balls that can be won. It would be in the best interest of the Abe administration to follow Singapore’s lead in accommodating the mental health needs of the Japanese people further.

Addressing mental health is especially a pressing issue considering Japan’s high suicide rates. A 2014 study suggests a strong positive correlation between suicide rates and gambling addiction, even pinpointing Japan as exemplary of this trend. If so, it is all the more reason to establish relevant safeguards, such as providing specialized counselling services for potential gambling addicts. Otherwise, the Abe administration will be gambling on the public’s support.

Adina Darbyshire is a first-year undergraduate student studying a Bachelor of Politics, Philosophy, and Economics at the Australia National University.