You are what you bleed

In Japan, blood is linked to personality

In 2008, four of the ten bestselling books in Japan linked personality traits to one’s blood type, covering topics from career to romance. Altogether the books A, B, AB and O sold 5 million copies.

An estimated 90% of Japanese people know their blood type. It is a common element of small talk, used to gain insight into another person’s way of thinking and behaving. In fact, it is used to explain one’s behaviour. In 2011 for example, Japan’s reconstruction minister was forced to resign after a number of offensive comments. His explanation for his behaviour? His blood type; B.

It began in 1916 when Japanese doctor Kimata Hara wrote a paper on the link between blood types and personalities. However it wasn’t till 1927 when Tajeki Furukawa published The Study of Temperament Through Blood Type, that the concept gained immense popularity. It is speculated that this interest grew as a reaction against Western racism.

The research was then adopted by Japan’s militarist government to train better soldiers. It led to the formation of battle groups according to the blood types of soldiers during the Second World War.

The fad faded by the end of the 30’s due to an apparent lack of scientific evidence but just a few decades later, Masahiko Nomi published a book which propelled the concept back into popularity. After his death, his son, Toshitaka took over his studies and promoted the idea further through his 1988 book You Are Your Blood Type. Toshitaka then established the Institute of Blood Type Humanics, stating his aim is not to judge or stereotype people, but to simply make the best of someone’s talents and improve human relationships.

The rapid success of books on 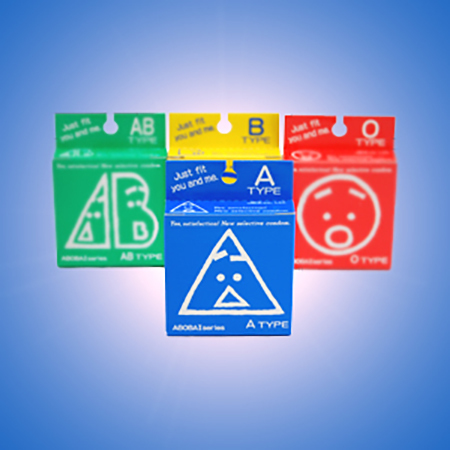 the topic have also made this fad into big business.

Blood type paraphernalia is a huge market, not only in Japan but also in surrounding nations such as Korea and Taiwan. A whole industry of customised products such as soft drinks, bath salts, towels, phone covers, and even condoms cater for different blood groups.

Morning television shows, magazines and newspapers feature blood type horoscopes, which are also used by matchmaking services.There is even a
movie, aptly named My Boyfriend is Type B which follows a type A woman advised not to date a man because of his blood type.

In Korea, this extends to K-Pop groups such as B1A4 named after the fact that one member has blood type B and the other four have blood type A. There is even rumoured to be an exclusive club in Korea for celebrities with blood type AB.

However, the embedding of blood-group typology into Japanese culture has also manifested itself into something darker. Incidences of bura-hura i.e. blood-type harassment, have led to children being bullied, end of relationships, and even the loss of jobs.

Although there is little evidence to suggest blood type plays any role in personality, it has not stopped it from becoming extremely popular and even affecting people’s quality of life. People need heuristics; ways to simplify the world and to understand people. However, problems start to occur when people use these heuristics to make huge life decisions.

Below are the personality traits for each blood group. Maybe now you may be able to understand why your Japanese girlfriend broke up with you.

Type A – The Farmer
Type A’s are introverted, reserved and perfectionists. However, they can be over-cautious and stubborn as well as a little obsessive. They make up around 40% of the population in Japan, and are most compatible with type A’s and AB’s.

Type B – The Hunter
Type B’s are creative, passionate, and optimistic. However, these people are frowned upon in Japanese society as they are unpredictable. Some of their bad traits include being self-centred and forgetful. They make up around 20% of the Japanese population, and are most compatible with type B’s and AB’s.

Type AB – The Humanist
The Humanist is highly organised, rational and empathetic. They are, however, indecisive and unforgiving. Around 10% of the Japanese are type AB’s, which means they are compatible with O’s and AB’s.

Type O – The Warrior
Type O’s are outgoing, ambitious, and natural leaders but can be vain, insensitive and ruthless. They make up 30% of Japan’s population, and are compatible with all types.

So what type do you fit into?